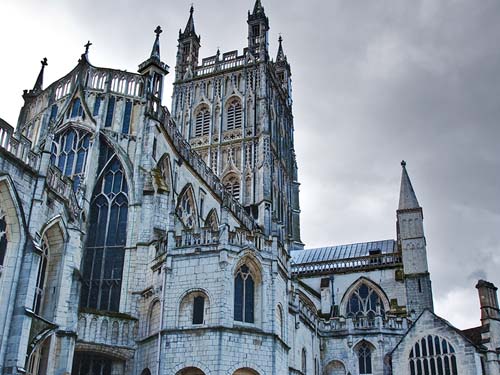 Think you know Gloucester? I bet there is at least one thing here that you did not know:

1. Roman Retirement Home. Gloucester was founded as a market town by the Romans but by 97AD it was an established colonia. This was an area where retired soldiers could settle and farm. Gloucester’s Roman name was Colonia Nervia Glevensium or Glevum for short.

2. Seeds Sown for Domesday Book. It was while staying at Gloucester at Xmas 1085 that William the Conqueror hit upon his plan to have a survey done detailing his new kingdom. The resultant Domesday Book was completed in August 1086 and provided records for 13,418 settlements in England.

3. Cheese Rolling Festival. Every year at the Spring Bank Holiday weekend thousands of people descend on Cooper’s Hill to take part in or watch the cheese rolling festival. Competitors chase a wheel of Double Gloucester cheese as it is sent rolling down the incline at up to 70mph.

4. Beatrix Potter’s Local Legend. Her story, The Tailor of Gloucester, is based on the tale of Gloucester tailor John Pritchard who worked in the city in the late 1800s. Commissioned to make a waistcoat for the mayor, Pritchard found that the work had been done by his assistants overnight. He subsequently claimed fairies had made it.

5. The Biggest Stained Glass Window in Britain. It can be found in Gloucester Cathedral and measures 22 metres by 12 metres, the size of a tennis court. When it was installed in the 1350s it was the largest in the world at that time.

6. One of Europe’s Largest Ice Cream Factories. Walls set up shop in 1959 and there has been an ice cream factory on the site ever since. In 2015 it reported its busiest summer ever.

7. Birthplace of the American National Anthem Composer. Well almost. John Stafford-Smith lived in Gloucester in the 1770s and wrote a song for the Anacreontic Society, of which he was a member, with the catchy title of The Anacreontic Song. It became famous around the world and had new words put to it in 1814 by American poet Francis Scott Key and was adopted as the US national anthem in 1916.

8. Spot the Pig. Gloucester is famous for its Old Spots, the oldest pedigree pigs in the world. They are still bred in the area today.

9. It has its Own Day. Gloucester Day is on 5th September each year. Originally set to mark the end of the Siege of Gloucester in 1643, it is usually followed by a week-long festival celebrating local history.

10. Poundstrecher is Haunted. Every town and city in Britain has hauntings but Gloucester’s Poundstretcher store boasts its own ghost of a Victorian woman, reputedly a young woman who hung herself on the site of what was formally a theatre. CCTV footage from 2005 allegedly shows the ghostly figure drifting through the aisles, presumably looking for a bargain.