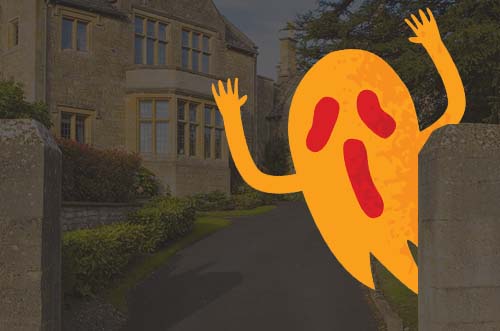 As Christmas approaches, I look forward to one of our most popular traditions – the seasonal ghost story. Many people are unaware that we have some of the UK’s most famous ghosts here amongst us in Gloucester and its environs.

Here are six of them for your spooky delight:

• HM Prison, Gloucester – Gloucester’s former prison housed some of the country’s most notorious criminals and witnessed many deaths and executions over the years. One spectral visitor is said to be the ghost of a woman who lived at the nearby abbey and regularly used to taunt the inmates. Until one of them killed her, that is.

• Woodchester Mansion – a 19th century gothic mansion hidden away in a valley near Stroud, construction was mysteriously abandoned before it was completed. It could have had something to do with the phantom horseman who rides up and down the mansion’s driveway or perhaps it was the floating head.

• The Ancient Ram Inn, Wootton-Under-Edge – notoriously known as the most haunted building in the UK, it is said that in the 1500s a witch was dragged from the inn and burned at the stake. Current owner, John Humphries, claims to have found evidence of devil worship, ritual sacrifice and a child’s skeleton buried under a staircase. One room allegedly receives regular visits from a frightening figure known as ‘The Bishop’.

• Ragged Cot Inn, near Stroud – in 1760 the inn’s landlord, Bill Clavers, took it into his head to rob the midnight stage to London. For courage he spent the evening drinking rum before arming himself with two loaded pistols. His wife, with babe in arms, tried to stop him but was roughly pushed aside. Having successfully carried out the robbery Bill returned to the inn only to find his wife and child dead at the bottom of the stairs. The pair are said to haunt the inn to this day.

I’m afraid I can’t guarantee the houses we offer aren’t haunted but there is no extra fee if they are!